The hot lava that flows out of the volcano causes great deal of damage. Although its flow rate is small and causes relatively few human damages, it causes much physical damage such as the destruction of houses, etc.

The overflow from the snowmelt and the crater lake produces large quantities of water following the cruption of a volcano, and runs down the hillside, all at once by engulfing the rocks and the earth. Similar to a debris flow, its scale is far greater.

Discharging hot gas and steam, lava pieces of various sizes from the crater run down the hillside at 300km/h or more. A blast reaching several hundred degrees Celsius causes serious damage without time for evacuation.

Sediment such as volcanic ash, etc, starts to be moved by the running water following rainfall after an eruption, and runs down the hillside all at once by engulfing gigantic rocks, etc. While a volcanic mudflow is occured directry by the eruption, the debris flow is caused by rainfall, so that it is grouped into a secondary mudflow.

Osawa area located at an elevation of 2200m is frequently damaged by severe landslides. A landslide originated in the area often turns into a debris flow. Civil engineering works for decreasing the amount of sediment flowing down from Osawa area pose a number of problems including technical issues like construction techniques and means for transporting materials, environment, landscape and other numeric problems. To attack these problems, pilot works have been under way since 1980. So far seventeen types of pilot works have been performed.

In order to mitigate and prevent sediment-related disasters associated with volcanic activities, it is important to establish non-structural measures such as a warning and evacuation system in parallel with structural measures. Various preparations are made, such as those for hazard maps based on a simulation of volcanic hazards and information systems which can quickly grasp information on volcanic

activities by installing monitor cameras or other sensors. 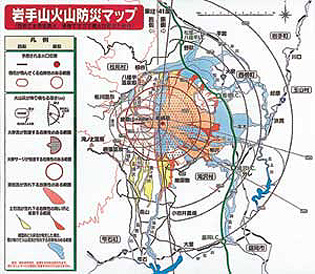