Skip to content
Part of soil, stone and gravel making up a hillside and river bed is intermingled with water from long-continuing or localized rainfall, becomes slushy like porridge and is carried downstream at a dash. The flow is called a “debris flow”.

Debris flow disaster occurred under the influence of the Bai-u front along Yamatetani river in Matsuyama City (June 20, 2001)

A debris flow caused by a torrential rainfall in Nishi-machi, Kochi City (September 25, 1998) 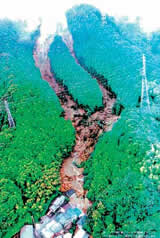 Sabo dams built in the upstream areas of mountain streams accumulate sediment and suppress production and flow of sediment. Those built at the exits of valleys work as a direct barrier to a debris flow which has occurred. A sabo dam with slits is particularly effective in capturing a debris flow because it has a larger capacity of sand pool under normal conditions. In case that there is a fear of flow-down of driftwood, a slit sabo dam is built as a preventive measure.