On Wednesday, November 14, the 11th Japan-Italy Disaster Prevention technology conference was held in Bari.
On the theme of sediment disaster countermeasures and landslide countermeasures, we introduced and exchanged opinions on efforts to respond to disasters, survey and observation methods for landslides, and landslide prediction in both countries.
To begin with, Dr. Raffaele Sannicandro (Director of the Water Disaster risk management in Puglia) made his presentation “Activity of the hydrogeological risk mitigation office in Puglia”, and Mr. Junichi Kurihara (Director General of Sabo Department, MLIT) did “Sediment Disaster Risk Management in Japan”.
From the other Japan side, Dr. Taro Uchida (Head of Sabo Div., National Institute for Land and Infrastructure Management (NILIM)), “Review for deep-seated rapid landslide study in NILIM in the last decade”, Dr. Hiroaki Izumiyama (Researcher of Sabo Div., NILIM) “Prolonged effects of sediment yield due to landslide on sediment discharge” and other 3 topics were presented.
Also from the Italy side, Piernicola Lollino (CNR IRPI) “Integrated analysis of geo-hydrological instability processes in Puglia”,“slope- Scale interpretative models, landslide mapping and rainfall thresholds for shallow landslide” and other 3 topics were announced.
In the presentation of the Italy, the development of monitoring technology had been introduced. Such as the use of LiDAR data and drones was similar usages in Japan. However, the automatic observation system by the bore-hole inclinometer in the high-altitude region was the case that had not been implemented in Japan. In addition, there was a topic that announcement contents of observation results had been choose for users such as administrative personnel, residents and so on .The each content had announced on the point of the effective use of the observation results for administrative personnel and residents each. Especially for the information for the residents, examples of how to provide information that were concise and understandable, which were supported by advertising designers, had been introduced. 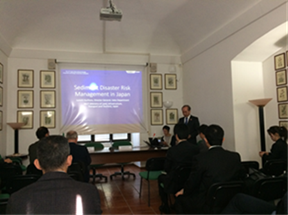 On Sunday, November 11, a field survey was conducted on Ponte Alto Check Dam located about 150km northwest of Venice. The dam was constructed in 1537 and eventually reached 38m in total height. Nowadays, the town of the downstream torrent is said to have been freed from the disaster by the series of 20 Check Dams including this dam. 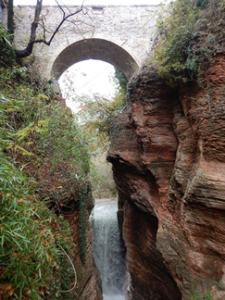 In the vicinity of this dam, the promenade and the place where the fall water from the dam was seen from the backside were maintained. A local guide guided this dam there and a lot of tourists visited. In particular, using a devised model in the description of the function of Check Dam by local guide was excellent. 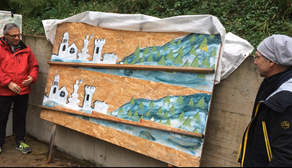 On Tuesday, November 13, we went to a field survey on the Montaguto landslide countermeasure project site located about 160km west of Bari. The landslide, which was 3km long, had an impact on the national highways and high-speed railways located at the end of the slope, with a re-sliding of about 5 million m3 of landslide body in 2005 and 2006. In 2010, it was also re-sliding, and as a countermeasure work, the shape of the landslide end and the soil retaining work and surface drainage were constructed. Also, as a transitional observation, the total station was installed, surface displacement and water pressure, meteorological observations have been carried out continuously. 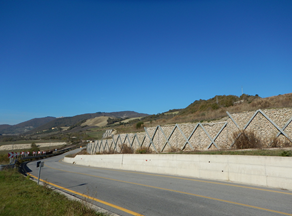